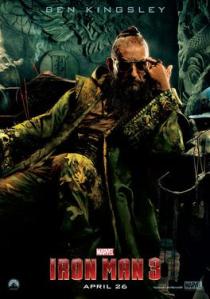 I normally do not write movie reviews, but this one had it coming. Just reading the title, you could probably figure out what I’m referring to. I am speaking of the recently released summer blockbuster film, Iron Man 3.

Playing off the history and success of its predesessors, and other Marvel Studios movies, Iron Man 3 could potentially be one of the top grossing movies of the year. It’s going to have its audience, those who like the first two movies, those who like Marvel Comic’s movies, such as last year’s Avengers and those who like your typical summertime blockbusters. But I have to take issue with what I saw in the movie. I warn you, this is a spoiler alert, so if you haven’t seen the movie, stop reading. Better yet, if you haven’t seen the movie, keep reading and save yourself the trouble.

We know the cinematic history of Iron Man. In the first movie he made his suit and took down evil-doers. In the second movie he took down more evil-doers trying to replicate his technology. Also, in the Avengers we saw Iron Man and the team of superheroes take down an alien invasion led by the Norse god Loki. Well in the third movie, we got introduced to Iron Man’s main arch nemesis the Mandarin. While being a top villain in the Marvel Comics universe, Mandarin appears mainly in Iron Man comics, so it was fitting that they finally got him in a movie.

Now, just knowing the history of the Mandarin, and knowing the world today, the character, particularly his back story wouldn’t work too well to be politically correct. But the way he was initially crafted in the movie was nothing short of brilliant. The writers updated the character, giving him a contemporary relevent background. Mandarin, played by English actor Sir Ben Kingsley, was a leader of a terrorist network bent on destroying the United States. The Mandarin in the comics is Chinese, as one may have figured by implying his name, but in the movie, they kept him as being an Asian, but west Asian. Mandarin was essentially like a Osama bin Laden type of figure. He threatened America, he threatened the world, he threatened Iron Man. All the way up until Iron Man found out who the Mandarin really was.

Instead of being the ultimate super-villain, the Mandarin was made a mockery of. The comic relief in the action movie. They spent an hour and a half building him up to be this ultimate bad guy who could likely get the best of Iron Man. But Tony Stark (yes Stark, not Iron Man) comes in his house with a gun and almost literally scares him to tears. The Mandarin is revealed to be a babbling pipsqueak.

Neither did they play up the role the Mandarin’s rings play in his powers. The movie showed the Mandarin wearing rings, but gave no explanation behind them. It’s almost like they were just apart of the characters decoration to go along with his robe. I don’t think I have ever been so disappointed in a film antagonist.

2 thoughts on “The Mandarin ruined it”