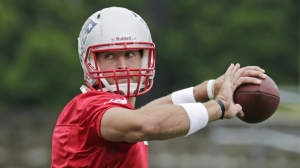 It’s official. Tim Tebow is back in the NFL, set to play football nonetheless. The New England Patriots announced Tuesday they signed the former Heisman Trophy winner for the upcoming season. This will be the quarterback’s third team in his brief NFL career.

Virtually all of America, whether a football fan or not, has followed the story of Tim Tebow from college through this point in the pros. For those who don’t follow the sport, understanding “Tebow-mania” could be difficult. For others who do know football, know every reason why Tim Tebow should or should not be playing American football. But we can all agree, it’s the one football story that keeps on giving.

So with the new team does that mean a new beginning with Tebow, or does it mean the beginning of the end for “Tebow-mania”?

Details of the contract are not immediately clear, but ESPN is reporting it’s a two-year agreement with no guaranteed money. They are also expecting that Tebow will be a quarterback on the team’s roster assuming he makes the team.

One thing we can say for sure though, he definitely will not be starting at quarterback. Tom Brady already has that covered for the team. But Patriots Assistant Coach Josh McDaniels, who drafted Tebow out of college and onto the Broncos is back with New England, and could have very likely had a hand in making this move. McDaniels gave Tebow his first professional quarterbacking stint, and he will be working with him again in the position.

But much of the talk around the skill-set of Tebow rest at his inability to play the quarterback position. And just as the talk of Tebow bounced back, also did talk of him in a new position. But whatever talk that would come from the Patriots camp will likely be limited due to Head Coach Bill Belichick, who is known for releasing limited information from his team.

Many words can describe Belichick, gruff or void of personality, but he leaves much for media to guess at what is going on with his team. In speaking on Tebow on Tuesday, Belichick commented, “Tim is a talented player, is smart and works hard. We’ll see how it goes.”

It’ll be a surprise if we get much more than that out of Belichick on Tebow for the rest of the season.

But Tim Tebow himself adds a bit to the allure of “Tebow-mania”. Every time Tebow talks, plays or even moves, it’s closely monitored by many. His first years with the Broncos, his struggles and accomplishments, were well documented. Then came the move on to the New York Jets. If the Jets planned an effective way to handle “Tebow-mania” it wasn’t shown. In fact after only a year and very little playing time, Tebow was shown the door.

Well the past has shown us that coach Belichick is well equipped to handle pretty much anything the media can throw at him any way he wants. And putting a damper on “Tebow-mania” could likely be one of them.

Its going to be a wait-and-see type of event to find out how the Patriots will use Tebow. But regardless on if Belichick lets him play, or even lets him speak to media, we all will still have plenty to talk about.