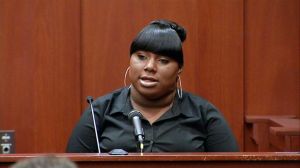 George Zimmerman is on trial for 2nd Degree Murder for the death of Trayvon Martin, a 17-year-old boy, who the state says was pursued and eventually killed by the neighborhood watchman in February of last year.

Thursday, was the second and final day of the prosecution’s star witness, Rachel Jeantel. She was the female friend of Trayvon who he was speaking with on the telephone that fateful night when he was shot and killed in Sanford, Florida.

When Jeantel was called to the stand to testify, no one could imagine that she would become the internet sensation across Twitter, Facebook and several other social networking sites, being the talk of the nation. But that talk is what is dividing America. It’s that talk that could decide the outcome of this trial. Not just if jurors believe her testimony, but if they can believe in what she represents.

The testimony of Jeantel provided some colorful moments to say the least. If it wasn’t the way she presented herself in this nationally televised court case, or the back and forth between her and the defense attorney cross-examining her with the judge giving them both warnings, or even the vernacular she was using; all of which are contributing to her being the most talked about witness of any highly publicized trial we’ve seen since Cato Kaelin.

So in comes the backlash. Calling her racist, disrespectful, and uneducated. And those are more of the kinder ways of putting many comments we’ve seen over the past two days in relation to Rachel Jeantel. Many are mocking not just her, but the prosecution for making her the star witness. It’s going from if we believe her to if she’s believable.

It’s becoming divisive with one side seeing a young black girl being hostile, offensive and abrasive and the other side seeing a nervous and scared teenager in an unfamiliar setting to her. But nonetheless our opinions were formed. People amazed at this young lady and even more stunned at what’s being said about her. So are they ugly comments, or is it an ugly truth?

Not saying that all of our youth are at a point of no return, but ask any inner-city educator to see if any of this sounds familiar. So if you’re shocked and in awe and the nature of a 19-year-old Florida girl, be in shock and in awe of yourself for doing your part in letting it get this far.