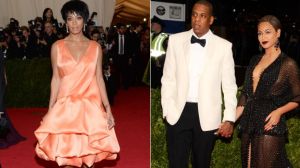 By now many of us have seen the video of Jay-Z getting attacked by his sister-in-law Solange. If you haven’t, what are you waiting for!

Now the only thing that remains on the minds of all who watched is why? What really happened that caused that lady to beat on the hip-hop mega-superstar, right in front of his wife?

The footage that was leaked just today by TMZ shows Jay-Z, his wife Beyoncé, her sister Solange and a security guard entering an elevator at the 2014 Met Gala last week. As soon as the door closed, Solange is shown punching Jay-Z several times. She then gets retrained by the security guard, but continues to throw multiple kicks and lunge at him to keep up with the assault. While this whole ordeal is being recorded on your typical elevator surveillance camera, Beyoncé just stands there for the entirety of the three-minute video, apparently not taking a side either way.

So what set her off to go so violent? At first guest, an easy consensus would be she was taking up in the defense of her sister. The number one reason why sisters take up for sisters, is over an unfaithful partner, who Solange was directing her anger toward. So was Jay-Z unfaithful to his wife Beyoncé and Solange found out about it that night and took out her frustrations on behalf of her older sister? Why else would Beyoncé stand there and let her sister be so abusive to her husband.

…THAT’S ONE WAY OF LOOKING AT IT. BUT HOW ABOUT THIS?

Solange, Beyoncé’s younger and less popular sister, was trying to make a name for herself. Beyoncé is a world-famous pop icon, who is married to arguably the most notable rapper of all-time. While Solange has a bit of a singing career in her own right, she does not have the multi-millions of her sister, nor does she have the notoriety. In fact, if you don’t follow closely to the R&B/pop scene, you may have to Google her just to find out who she is or what she does. And without having an established career or hit single in years, she very likely could be supported by her sister and brother-in-law. Maybe bread-winner Jay-Z said enough is enough. Cutting her off and putting her out would be enough to set a loose cannon flying off the handle.

BUT REAL CONSPIRACY THEORIST KNOW THIS TO BE TRUE…

It’s no secret that Jay-Z, Beyoncé and even their new bundle of joy are rumored to be apart of the Illuminati, a mythical organization with designs on controlling the world. The hand signals, music lyrics, symbolism and clothing all contribute to a conception that is related to the Enlightenment era group who opposed the Catholic Church, that are now modernized to be a group of powerful elitist who seek a “New World Order” through politics, religion, entertainment, government, etc. How does Solange play into this? Well its obvious she tried to beat her way in? Or worst, upset that Jay-Z won’t let her in their club. Maybe Solange got threatened if she spilled the beans on the inner workings of the group. Either way, the release of this leaked video is further proof in itself of a conspiracy.

LET’S BE REAL THOUGH, THE TRUTH IS…

There was probably some alcohol and drugs involved, or not involved like they should have been. There’s been talk of the mental issues of Solange who may be suffering from ADHD, or perhaps bipolar disorder. In which being off her meds would cause an outburst like we saw in the tape. She’s talked about mood swings and stress and even canceled a tour last year because of which. And who’s to say she didn’t have a couple of drinks (maybe too many drinks) before they hit the elevator. If someone is intoxicated enough, or their faculties are effected enough where they could not act rational, one really can’t do anything for that person but just stand by and let them get it out of their system. Hence the restraint we saw in Jay-Z, and the idleness we saw with Beyoncé.

Not for nothin’ but its good to know what Stevie J, Joseline, K. Michelle and Benzino go through isn’t limited to reality television. Whatever scene from Love & Hip Hop Solange was trying to act out in that elevator has gotten us all curious. But we can only speculate as to her reasons for her tantrum, because that’s what all this is, just pure speculation. Maybe Jay-Z had an affair she didn’t like, maybe the Illuminati put her up to it, maybe she’s just a crazy drunk. Who knows. All of those could be true; or perhaps none of those.

One thought on “Jay-Z vs. Solange…What really happen?”